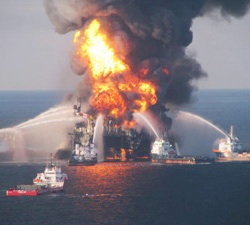 Covering the Gulf Oil Spill, One Story at a Time

As sticky, thick, black oil washed ashore the Gulf of Mexico’s pristine powdery, white beaches, ruining livelihoods, killing sea life and becoming the worst environmental disaster the U.S. has faced, reporters were dispatched to cover the story. Most reporters operated as one-man bands, a trend in the industry. They dealt with emotional victims and faced technological challenges.

CBS Radio News Correspondent Peter King was on the scene early on, returning multiple times to Louisiana and once to the Panhandle, where he spoke to the people in the fishing and tourism industry.

In one report, one he termed a “picture-postcard,”, King wove audio seamlessly into his story.  King referred to grating sounds of angry seagulls as they flew overhead. The veteran journalist indicated the birds weren’t the only ones who were angry about the oil spill. The owner of a fishing lodge and marina told King about how cancellations were pouring in. The exasperated man said he had just finished rebuilding after Hurricane Katrina. King captured frustration in the man’s voice. The emotion was amplified by the agitating sound of screeching seagulls. The listener could feel this man’s unfolding tragedy. In 30 seconds, the piece packed a powerful punch.

What is this veteran radio reporter’s secret? King said he spoke to “real people,” and focused how the spill was negatively affecting “their lives, their livelihoods, their way of life and how they feel like they are loosing everything.”

This award-winning journalist’s greatest challenge in covering this story was the depth and breath he provided.

“The area is across such a wide field, there is so much to cover; yet you want to find other stories other reporters haven’t done,” he said. “And as this story goes on for weeks and months, that’s becoming more and more of a challenge.”

Fox Radio News Senior National Correspondent Rich Johnson didn’t file television reports but sometimes fed material from a television satellite truck. He said his dilemma at the satellite truck wasn’t getting a signal out, but rather getting a connection so that he could hear his cue from anchors who were introducing him. They could hear him just fine, but he couldn’t hear them.

Often cell signals were non-existent, landlines were too far away from beaches and Internet signals were low. Johnson said he remained versatile. The news veteran filed anyway he could. Sometimes he used a landline, other times a cell phone, satellite phone or skype.

Johnson said what he found most compelling was how this story unfolded. First came the cancellations, followed by scarce business at the height of tourist season. When the oil arrived, so did the tears as residents wondered how they going to feed their families.

“I went into a low-budget Italian pasta-pizza joint like you’d see all over New York, New Jersey and Pennsylvania, and I was the only customer,” he said.

Colleagues Peter King and Rich Johnson both agreed that when they are covering stories in which people are distraught, they feel honor-bound to watch, listen, report accurately, while capturing the emotions they observe.

Many reporters say they set aside their intense feelings while the story is unfolding, only to decompress when back home.  Said Johnson, “I’m thinking about more now that I left and am back here.”

King says, “If you are not feeling the emotion, you must be some kind of idiot. As a reporter, I feel maybe telling the story is going to help (victims) in someway. But you absolutely have to stay focused on doing the story justice, rather than getting caught up in your own emotion.”

King admits, “How has this story affected me? It’s heartbreaking. In many cases, the people we’re covering are the ‘have-nots’. They don’t have a lot to begin with, and now are losing everything.”

ABC News Radio dispatched Matt Gutman to the scene. According to Steve Jones, Vice-President of ABC Radio, Gutman demonstrated versatility when he fed reports back to the news bureaus for broadcast on radio and television. Jones said Gutman is a rising-star in part, because he can shoot, produce, and edit for radio and television audiences.

ABC is proactive in preparing journalists to work on a number of platforms.  Journalists undergo one week of training in a new program called, “The Digital Bullpen.”

Said Jones, “People who are expected to provide content for multiple platforms go through this one week of training. There is a radio component to it for ABC News Radio so that folks who don’t have radio training understand what it is we need. Conversely, we have trained all our radio reporters in how to shoot video; they do  very little editing. We are not throwing anyone into a situation where they will not be confident in their abilities.”

Kim Rankin seems confident in her abilities to do it all when out in the field. Rankin, a reporter for CBS affiliate WIAT-TV in Birmingham, Alabama, shot, produced, voiced and edited reports for 5, 6 and 10 p.m. newscasts. She even has learned how to operate the satellite truck, if needed. Rankin loads her video into her laptop and uses FTP to feed it back to the news station in Birmingham.

I caught up with her as she was wiping taffy-like thick ooze off of her shoes and clothes in Orange Beach, Alabama. Rankin said, “You want to capture the best video, the best sound and the best story, and our best story is in the middle of the oil.”

Unlike volunteers who were wearing HAZMAT protective clothing, she was feeling vulnerable to the elements. Her biggest challenge was trying to keep the nasty, sticky oil off her skin and her gear.

Her advice for journalists? Hand-out business cards, ask for tips, ask people to call if they see news, and write down contact information of everyone you meet, then call them and ask what they know and if an interview can be scheduled. She also advises reporters to call contacts in the city you are driving to set up stories.

Frankly Speaking Communications owner Donna Francavilla is a media consultant in Birmingham, a former RTDNA Director-at-Large, and a freelance journalist for CBS-TV, CBS News Radio, America in the Morning and Agence France-Presse.                         ###