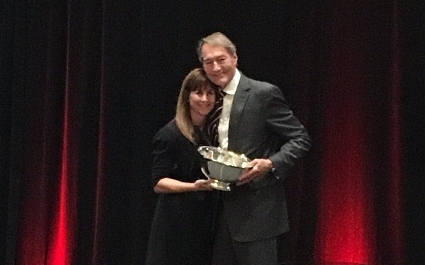 Charlie Rose, co-host of CBS This Morning and host of the PBS interview show Charlie Rose, said of the profession, “It’s a noble calling.“

In a one-on-one interview RTDNA, Rose was asked what he considered to be his best interview. He said the question was impossible to answer because, “What’s been great about my journey is that it’s about news. It’s about science. It’s about culture. It’s about sports and entertainment. It’s a range of human endeavor.”

Rose was chosen to receive RTDNA’s prestigious Paul White Award at EIJ16 in New Orleans for his significant contributions to broadcast journalism. He told the audience, “I know of no better place to seek the truth.”

Fortune Magazine said Charlie Rose has the most earnest, essential public-affairs show on the air right now. Of his show, Rose said, “What really makes a difference? Is there real engagement? Does someone look within themselves to tell you something you haven’t heard before.”

Rose summarized his 40-year career in journalism by saying it’s been “an amazing road for me. And he advised young journalists to pursue their chosen profession with great energy and hard work. He admitted that anyone who has been successful receives accolades because they work harder than anyone else. He offered this advice about the power of good writing, which impressed the crowd in the ballroom at the Sheraton New Orelans:  “One word can sum up a thousand pictures; one word can turn a good sentence into a great sentence.”

Amy Tardif, RTDNF Foundation Chair told the collection of journalists present that in the world of broadcast news Charlie Rose is unique.  “At PBS, he raises all of his own underwriting. (That’s public TV lingo for advertising.) Tardif said that although he told Fortune magazine he relishes what this means for his independence, especially when it comes to choosing guests, Charlie Rose says it can be a source of frustration.” Tardif noted that when Charlie Rose gave the commencement speech at the University of the South in Tennessee this spring, the told graduates to “be crazy, be humble and dream big.”

Time magazine named him among the 100 most influential people in the world. He was named the recipient of the Walter Cronkite Excellence in Journalism Award last year. Charlie Rose told the group, “I believe in the power of questions.”

We asked Rose to name the biggest or best interview of his career, and he said it was an impossible question to answer: